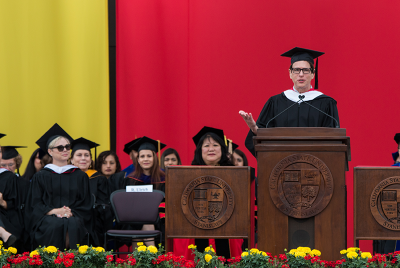 The largest graduating class in Stanislaus State history, with 3,022 receiving degrees or credentials, was honored during three commencement ceremonies May 25-26, as the University renewed its tradition of inviting keynote speakers, mostly alumni, to inspire the graduates.

George Boodrookas, the dean of advancement at Modesto Junior College who earned his master’s and doctorate from Stan State, emphasized the importance of learning from personal stories as he addressed those receiving graduate degrees and credentials.

The Friday morning ceremony for graduates from the College of the Arts, Humanities and Social Sciences and the College of Education, Kinesiology and Social Work included words of encouragement from Robert and Kim Ulrich, a successful Hollywood couple who married shortly after graduating from Stan State.

Robert Ulrich, an Emmy-winning casting director, used lessons from his own career to inspire the graduates.

“I had to follow my heart, which was to be an actor,” he said. “I tried for six years to become an actor in New York, and I failed. But I had no regrets because I had tried. The only thing that can stop you from doing what you really want ... is you.”

Kim Ulrich, an actress with more than 60 television credits, expounded on the wisdom expressed in the Dr. Seuss book “Oh, the Places You’ll Go.”

Graduates from the College of Business Administration and College of Science were addressed by Foster Farms President and CEO Laura Flanagan, who encouraged the graduates to never forget their roots and urged them to speak out.

“Remember where you came from and never forget to continue to nourish your roots because that will allow you to blossom,” said Flanagan, a graduate of Case Western Reserve who earned her MBA from Stanford in 1996. “As you blaze your trail I urge you to speak out and let your feelings be known. But always remember that dialogue is better than monologue.”

Silveira also was one of three student speakers, and she reminded her fellow 2017 graduates that a diploma, while only made of paper, is a ticket to the future.

“This paper represents countless hours of studying to make it here today,” Silveira said. “Sleepless nights, energy drinks and thousands of hours in the classroom, forging some of the strongest friendships we’ll ever have.”

“I showed up at Stan State with a backpack, a dream and no financial support from my family,” he said. “And one of the main things I took from college is that the university experience allows us to understand how to take falls in life and how to get back up.”

Addressing all three ceremonies, Stanislaus State President Ellen Junn urged the graduates to heed the lessons of their heads, hearts and hands as they go forward in life.

“The most successful people believe that their minds will continue to grow,” Junn said. “The heart symbolizes gratitude. Recent studies have shown that the act of showing gratitude reaps both psychological and physiological benefits in your life. And your hands symbolize the act of giving back and serving each other with kindness. Find something you love outside of yourself and volunteer.”