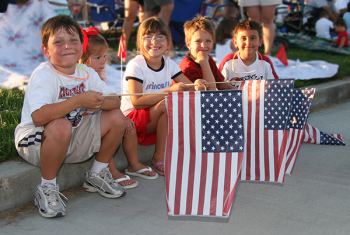 The entire southern boundary of CSU Stanislaus was built initially unencumbered by fences.

When the campus took form in the mid-1960s and an oasis of higher education rose from what had been a vineyard, the main entrance looked across open land to the city of Turlock. The city had 14,000 residents when the campus opened in 1965, and today boasts more than 70,000 residents, with commercial and housing now completely circling the 228-acre University plot.

To this day, no fence stands between the southern boundary and the city beyond. No barriers, only invitations.

Yet for all these years, the relationship between the University and the city — while generally cordial and even appreciative — never has reached a full symbiotic state.

That relationship is changing rapidly, and all for the better. Whether it's the partnership of city and University in bringing Independence Day fireworks back on campus or the University's presence in downtown Turlock with the opening of the Art Space on Main, there's a noticeable uptick in the camaraderie between CSU Stanislaus and the city it calls home.

"It was eye-opening to me when I came here and started meeting people off campus that one of the first comments they would make was that they were so excited about the connections they were seeing between the University and the community — connections that were being built or rebuilt," said Tim Lynch, the vice president for communications and public affairs at CSU Stanislaus.

"The three of them have lunch every month and chat about all kind of things that are positive," said Maryn Pitt, assistant to the city manager for housing and economic development. "We also meet quarterly with the University and the school district. We've done a lot of things together and done them well, and we're looking for ways to make the cooperation even better."

Much of the dialogue involves ways to make Turlock residents and their neighbors more comfortable with the University — finding ways for the public to embrace the idea of CSU Stanislaus being their campus.

And nothing, it seems, excites local residents quite as much as Fourth of July fireworks, which return to the CSU Stanislaus campus this Independence Day after five years at the Stanislaus County Fairgrounds. The celebration was held on campus for 24 years before budget cuts forced the University to withdraw from the event in 2009.

In January, with financial support and logistical assistance from the city and the Turlock Chamber of Commerce, President Sheley was able to announce the return of the festivities and pyrotechnics to campus.

"We're very happy to be partnering with the Chamber to bring this tradition back to campus," President Sheley said at the time of the announcement. "We'll be celebrating our nation's history while at the same time providing the community a great place to have fun. In the past we've referred to ourselves as a hidden gem. With this event and others like it, I think you can get rid of 'hidden.' In still challenging budget times, we are committed to showing the community that this is their University."

The Independence Day celebration will bring thousands of revelers to campus, but Art Space on Main located in downtown Turlock is an example of the University assuming an off-campus presence — bringing the talents of its students directly to the people.

Dedicated last September, Art Space includes a gallery that displays works of faculty and students, and also an active workspace for students. The space, managed by University Art Gallery Director Dean DeCocker, is open to the public from noon to 5 p.m. Monday through Wednesday and from noon to 9 p.m. Thursday through Saturday.

"It brings the University downtown and adds to what is a growing sense of a reinvigorated downtown scene," Lynch said. "The University wants to be a part of that reinvigoration. It's a tangible way of showing some of the real expertise we have and our ability to show the depth of the talent we have on campus."

These are only two of the myriad ways in which the University, the city of Turlock, the Turlock Chamber of Commerce and Turlock Unified School District are working together. This, of course, is in addition to the many local businesses sponsoring internships and hosting projects for learning and mentoring. The result not only is an improvement in the quality of life in the community and on campus, but a growing source of pride for all involved — a tearing-down of the invisible fences between campus and community.

"Every community has its own relationship with its campus and we have to find that balance," Pitt said. "I'm an alumna and I've never been more proud because of all the collaboration going on. We're nowhere close to being done."