Golden Grads Returned to a Campus They Barely Recognized 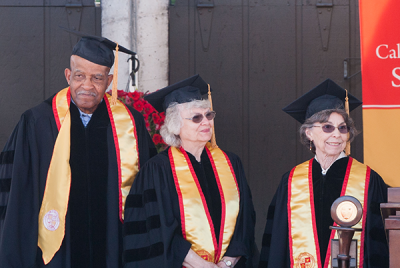 When Sharon Neubaum Arpoika, Diana Messamer and Lenard Rhodes strolled across the platform to receive their diplomas in 1965 from Stanislaus State College, the campus as it currently exists remained very much a dream.

The three took classes at the Stanislaus County Fairgrounds, and while they were part of the first class to be feted in an on-campus commencement, they did so in a ceremony held on the second floor of the library — the first completed building.

All three will be given a grand tour of the CSU Stanislaus campus as part of their participation as Golden Grads during the 2015 Commencement.

Golden Grads, a program in its third year at CSU Stanislaus, was introduced by President Joseph F. Sheley not only to celebrate the graduates of 50 years ago, but also to expose current students to the history of their campus.

"It's a special time for Golden Grads to come back and be recognized," said Lisa McMullen, director of alumni relations. "What we've found over the last three years is that a few of our honorees who have come back for the ceremony never participated in their own commencements. This was their first and that's been special."

The three honorees have been invited to be part of the platform party for the graduation ceremonies, but that's only one of the highlights of their Golden Grad experience.

"We provide them with regalia and a beautiful Golden Grad sash, and they're encouraged to invite guests to celebrate their status as a Golden Grad," McMullen said. "One of them is bringing a granddaughter who is a junior in high school as a way of introducing her to the college scene. The President hosts an informal reception that allows everyone on the platform party to interact in a relaxed setting."

The responses received from former Golden Grads have been positive, even heartwarming, McMullen said.

"For alumni to come back to a campus that wasn't here when they were in school is incredible — to see what their University has become," she said. "It's a wonderful way to connect alumni with the campus and honor our University's history."

Sharon Neubaum Arpoika (B.A., English) attended and graduated from Stanislaus with her mother, Evelyn Neubaum. She worked with the Stanislaus County Free Library for more than 35 years, retiring in 2010 as head of teens and children's services. She was in the Literature Society and was Chair of the 1965 Halloween Dance Party. Sharon received the J. Burton Vasche award and was the 1965 commencement student speaker, highlighting the advantages of graduating from a Liberal Arts college. She lives in Oakdale.

Diana Messamer (B.A., English) taught first and second grade in San Jose's Evergreen Elementary School District for more than 34 years, retiring in 2006. She continues to work with children, mentoring fifth- and sixth-graders at Modesto's John C. Fremont Elementary, using conflict resolution skills based on the On Earth Peace program — an independent agency of the Church of the Brethren. Diana and her husband Chuck, who live in Manteca, celebrated their 50th wedding anniversary last year.

Lenard Rhodes (B.A., social sciences) taught at Merced High School for 31 years. He retired in 1998, but still teaches at Merced High. After his graduation from Stanislaus he remained on campus to work with the Upward Bound program. He ran the non-profit Youth Organization for Unity for 12 years. His wife of 52 years, Dorothy, also is a Stanislaus graduate and they continue to live in Merced.