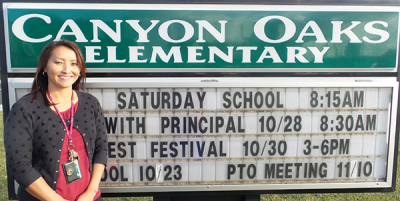 ​Kay Vang was on the move again this fall, moving from her home in Fresno, where she was principal of Heaton Elementary School, to American Canyon, near Napa, where she assumed the same role at Canyon Oaks Elementary.

But moving is nothing new to Vang, 39, who has been on the move — always upward, always forward — her entire life, in all the years before and since earning her master’s and doctoral degrees from California State University, Stanislaus.

Her family was part of the Hmong refugee American immigration, which began in 1975 when more than 200,000 Hmong fled Laos following the North Vietnamese invasion. Vang was born in a refugee camp in Thailand, and her family relocated to Portland, Oregon, in 1979 when she was 3. Vang didn’t speak a word of English.

Portland wasn’t the family’s choice, but the Hmong refugees were sent to where sponsoring families agreed to help with the assimilation process. The Vangs were farmers in their tropical native country, and Portland — anything but tropical — was where the U.S. government assigned them.

“I don’t remember anything about Thailand but I recall things about how chaotic it was during the relocation as families were split up and not sure where they were going,” Vang said. “My parents have told me about how wild it was at the airport and how they almost left me there in all the confusion.”

Shortly after arriving in Oregon, Vang’s father continued the journey toward assuring a better life for his family by taking night classes to learn English.

“He always made an effort to talk to all of us about the importance of education as the key to success,” Vang said. “Not only was it important, but by going to school he was our model for education, showing us that importance first-hand.”

Vang had an older sister and younger brother when the family moved to America. Four more sisters and three brothers were to follow, and the commitment to education never wavered. When the family moved to Stockton in 1980, her father began taking courses at San Joaquin Delta College, remarkable given that — according to U.S. Census data — only 7 percent of the Hmong population in the U.S. have college degrees. To date, all of Vang’s sisters and one of her brothers have college degrees.

“And the youngest is in pharmacy school,” she said. “I was in middle school when my dad was taking classes and he would have me help him with his college homework. So there I was, a kid, doing college work and I was afraid that he’d get caught because a lot of his papers had my handwriting and my handwriting was so much better than his.”

Through it all, Kay Vang embraced her father’s message. She graduated from Lincoln High and Sacramento State, where she earned her degree in liberal studies in 1998. She immediately enrolled in the credential program at Stanislaus State and only two months into the fall semester noticed that the Patterson Joint Unified School District kept posting help wanted ads for elementary school teachers.

She applied, knowing she didn’t have a shot at being hired, thinking only that the process would help her interviewing skills. She was hired on the spot, completed her credential work and taught at Northmead Elementary School for nine years while turning her career path toward administration.

“I got into administration because I wanted to have a bigger and broader impact in what was happening in education,” Vang said. “My passion is with English learners because I am one. Stanislaus State had a great program, and every time I turned around there was something new for me to study.”

Vang earned her master’s in education curriculum and instruction in 2006, and left the classroom to become an instructional coach for Patterson schools. She became principal at Patterson’s Las Palmas Elementary in 2010 and earned her doctorate in educational leadership in 2011 as a member of the University’s first doctoral cohort.

“I had great relationships with all my professors at Stanislaus State,” she said. “They were always inspiring me to try new things. It happened for me at Stanislaus because there were so many people along the way who were willing to help.”

She took the principal’s position in Fresno in 2011 and this summer gravitated to the cooler climate of the Napa region. The move also allowed her to be closer to her family, especially her parents, who now reside in Sacramento.

Is she done moving?