Alumni Serve as Ambassadors for Student Success Through One Purpose 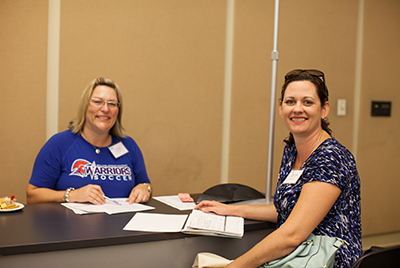 Alumnae and One Purpose volunteers CJ Chaney and Alison Allen log pledges of support for the annual campaign.

In the second year of the One Purpose campaign, more than 200 alumni pledged their support for student scholarships at Stanislaus State. During the six-week fund drive this fall, volunteers raised more than $425,000 that will be awarded as scholarships to high-achieving Stanislaus State students who demonstrate academic promise.

Rallying this effort were alumni volunteers from throughout the region who stepped forward to support student success and secure pledges for the cause. They were among a group of volunteers from across the campus and the community who joined forces to make the campaign a success.The donors and volunteers who supported One Purpose in its second year are representative of a community that values education and invests in students at a University that fuels the region.

Stanislaus State alumnus John Jacinto and his wife Edith played an instrumental role in the success of the One Purpose campaign. They reported more than $50,000 in support over the six-week campaign, making them the top volunteers for a second year.

Alumna Alison Allen, with her husband Michael, of Allen Mortuary, reaffirmed their commitment to support student scholarships by renewing their pledge of $10,000, the highest tier for individual and corporate donors.

Volunteer Chris Murphy, a Stanislaus State alumnus, emphasized the importance of connecting people with the University and the opportunities it provides for students and for the future of the region. His fundraising success was driven by his passion to share the value of education.

In the final week of the campaign, Murphy took to social media as a vehicle to spread the word about One Purpose and the value of investing in students. His messages helped him to raise more than $17,000 in pledges, making him the most successful among new volunteers this year.

In addition to the support provided by scholarships raised through One Purpose, the volunteers have served as ambassadors of goodwill for the campus, and this effort is boosting affinity for the University. One Purpose volunteer and Stanislaus State alumnus Marty Grynbaum said the positive impact of the University on the region is becoming more evident, and that One Purpose is generating awareness.

“It’s become more of a college community — when you go downtown and you see college students — the University has become an integral part of the community,” Grynbaum said. “A great part of One Purpose is that it gets alumni and community members involved with the University. They get a better understanding of what the University does for the region. The value in our local University is apparent and it’s a partnership in which everyone benefits.”

While the six-week volunteer effort has come to a close, those interested in making an annual gift to support scholarships still may make a contribution by contacting the Division of University Advancement at (209) 667-3131 or by visiting www.csustan.edu/one-purpose.