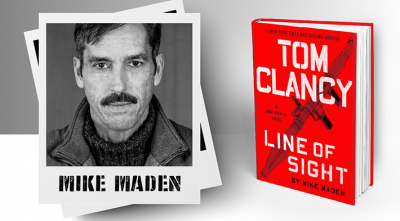 About two years ago, techno-thriller novelist Mike Maden received a life- and career-changing phone call from one of his editors.

Maden, a 1982 Stanislaus State political science graduate, already had achieved widespread and critical success with his “Drone” series of four novels, but he was about to receive an offer that would take him — and his writing — to a much higher level of exposure.

“I got the call and was asked if I wanted to write a Tom Clancy novel,” Maden said. “That was both the greatest honor and the most terrifying day of my literary life because, suddenly, I had committed myself to writing a Tom Clancy novel. It would be like the Queen of England called and asked me to add a few lines to the St. Crispin’s Day speech in Henry V.”

Clancy rose to fame in 1984 with his first novel “The Hunt for Red October,” which introduced Jack Ryan to the world and paved the way for him to write 18 more series entries before passing away in 2013. Since Clancy’s death, the series has been continued with annual releases from publisher Penguin Random House that follow two paths — one featuring Jack Ryan, the other centered on Jack Ryan Jr.

“This is a tremendous privilege and honor and I’m blessed to be a part of it,” Maden said. “But because there’s such a great Clancy canon, I take it very seriously. I was a reader and a fan of Clancy first, so I have to bring something worthy of the name for the fans.”

And the first rule of writing a Tom Clancy novel? Don’t try to emulate the master.

“They were very clear that in no way did they want me to try to imitate Tom Clancy, which I knew I couldn’t do anyway,” Maden said. “They told me to write in my own voice and in my own style. I was grateful for that because I avoided an impossible task. You can’t imitate the guy who invented the techno-thriller genre.”

Maden obviously is thankful for the opportunity to continue the Jack Ryan Jr. storyline, but he also is quick to thank the people who made it possible and inspired him to become a successful author in the first place — and that journey began at Stan State.

Maden grew up in Stockton, cleaning his dad’s bar and mowing lawns to earn some cash. After graduating from Stockton’s Stagg High School, he moved to Turlock and worked in a local slaughterhouse and feed mill while attending Stan State.

“Stan State was a great little school at the time that was available to me and very affordable,” he said. “It offered a full spectrum of courses and I’m grateful for the opportunities it gave me.”

He said he caught the academic bug at Stan State, and eventually earned his master’s and Ph.D. in political science at UC Davis. The fiction writing bug would hit much later. He was working at a non-profit organization near Dallas and found himself in a program that challenged participants to brainstorm and produce a one-minute movie in 24 hours.

“I had a blast and failed, but it was a great experience,” Maden said. “I helped create a festival in which folks had eight days to create a six-minute film. Coming out of that I decided that I should try my hand at writing. I started writing a few scripts and got some traction.”

Through this time, Maden remained in touch with two close friends he made at Stan State — both of whom were writing novels that had failed to reach the public. Brian “B.V.” Larson and Vaughn Heppner — both Stan State graduates who remain in the Turlock area — both tried to convince Maden to try his hand at writing a novel, but Maden refused.

“I wondered why I should do that if they couldn’t sell theirs,” Maden said. “Both of them eventually got their works onto Kindle and they both blew up. They are hugely successful as indie authors, selling many more books than most traditionally published bestsellers.”

Larson and Heppner each have written more than 50 books, and they have sold millions of copies thanks to the quality of the writing and the success of the Amazon e-reader format. Because of his friends’ e-book success, Maden penned “Drone” with the idea of joining them in the e-book realm. He first showed the manuscript to a literary agent friend, who saw bigger potential.

“After reading it, he thought he could sell it to a New York publishing house,” Maden said. “I didn’t think that was possible, but he got the book into a bidding war and I got a multi-book deal from Penguin Random House.”

“Drone” was published in October 2013, and has been followed by sequels “Blue Warrior,” “Drone Command” and “Drone Threat.”

Maden now lives in Tennessee with his wife Angela. They have three grown sons. The oldest, Mike Jr., graduated from Stan State in 2012 with a degree in business administration.

Maden said he’s working on outlines to continue his “Drone” series of novels, but he finds that continuing Tom Clancy’s legacy is both fulfilling and a great deal of fun.

“There’s a giant Tom Clancy toy store already built for me,” Maden said. “I’ve been given the keys and told to go in there and play. I have an enormous amount of freedom within this universe of characters.”

Maden admits those keys never would have been handed over had he not first been a Stan State student — an experience that put in motion a series of events that led to an amazing opportunity.

“Stan State was the perfect school at the perfect time for me,” he said. “I’m grateful for the faculty members I encountered. It was a small college community, and I was so encouraged and inspired by my experience.”