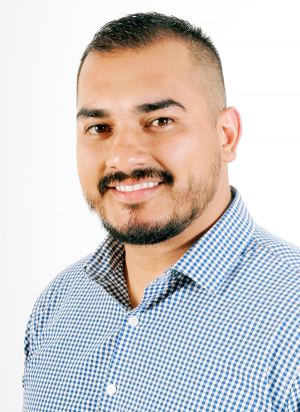 Eder Javier Cuiriz remembers his years at Stan State fondly. As the regional manager of client success for the McClatchy Company, which owns and operates 29 newspapers in 14 states, Cuiriz has come a long way since being a student.

After graduating from Johansen High School, Cuiriz wanted to stay in his hometown of Modesto, so he attended Modesto Junior College and transferred to Stan State after obtaining his associate degree. Like most college students, he wasn’t sure what career path he would choose, but after looking through job descriptions online, he discovered the field of digital marketing.

He printed out marketing manager and digital marketing job descriptions, highlighted the skills he would need and decided to pursue a degree in communications. But he soon discovered that the journey to preparing for these dream jobs would call for more than simply acquiring the skills listed in the descriptions — it would require perseverance and dedication. Cuiriz realized this after taking a difficult upper-division course about communication research methods.

“I sat in my car for 45 minutes after the first day of my research methods class and thought, ‘I don’t know what they’re talking about,’” Cuiriz said. “I heard students drop words like ‘qualitative’ and ‘quantitative’ and ‘sample size,’ and I was like, ‘I don’t know the first thing about any of this. It’s like another language.’ I already felt behind compared to my classmates.”

Cuiriz decided to overcome his fear of falling behind by doing research outside of class. He googled words he didn’t know and watched YouTube videos that broke down concepts he didn’t understand.

“I ended up passing that class, and I’m really proud of that,” Cuiriz said.

But the proudest moment for Cuiriz was not passing the class, nor was it graduating from Stan State in 2016. It happened after his father became very sick.

“Up until that point, I had a 4.0 and straight A’s, but then I started struggling,” Cuiriz said. “I had dropped out of school once before, so when my dad got sick, I thought I would have to drop out again.’”

His fiancé explained to him that his professors would understand and would help him. She was right. To his surprise, his professors were very supportive when he told them what had happened.

“My professors coordinated with my classmates when I was absent to see my dad in the hospital,” Cuiriz said. “I finished that semester with C’s and B’s, and to me that was the proudest C and B average I ever got in my life. Normally you don’t celebrate those, but I did because I was so behind.”

Not only did Cuiriz stay in school, but he excelled. He made the Dean’s List, and with his professors’ influence he joined communication studies honor societies the National Communication Association and Lambda Pi Eta. He was also a founding member of the Stan State Media Center and became a recipient of a SERSCA grant to expand the University newspaper, the Signal.

“Javi embraced the convergence of media I teach in my classes,” said Shannon Stevens, communications professor and advisor of the Signal. “He was so good at integrating photos, videos and social media. He added new ways of storytelling with Snapchat and really put the paper’s Instagram and Facebook accounts on the map.”

He quickly learned Google Analytics and discovered project management tools (such as Trello, a tool that the Signal’s journalists still use today), and he created opportunities for the paper to gain funding through online ads.

“I feel so lucky to know Javi, and it is enriching to see how he has used his Stan State education as a jumping off point as he continues to learn and thrive in his career,” Stevens said.

Now, Cuiriz oversees everything digital at McClatchy. As a client success manager, he ensures anything McClatchy does for its customers is productive and successful, whether using physical ads or virtual ads on social media. He credits Stan State for teaching him the three main skills he has used to reach this point in his career: being task-oriented, being creative and persevering when situations get tough.

Cuiriz is grateful for the guidance of his mentors in the Communication Studies Department, and he makes sure to visit them and talk with communication studies students whenever he gets a chance. He tells students about his path — reading job descriptions to discover career opportunities and the skills they require — and how that strategy can work for them. He also encourages students to value the skills they learn to be successful students, such as managing classwork and due dates, as well as being able to tell stories through writing and presentations.

“When you’re applying to a job, don’t just apply in general,” Cuiriz advises. “Make sure your resume pops and reflects the job description. The main thing is getting that interview because that’s when you can really show your abilities, but the way to get there is to have a resume that stands out.”