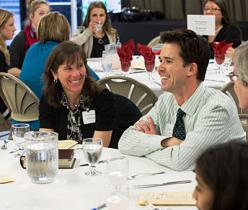 Alumni Enrich ‘Dinner With a Scientist’

Every year, more than 100 local middle and high school students spend a few hours at CSU Stanislaus, touring labs and getting to know scientists from the university and community.

And every year, many of the scientists and teachers who make Dinner With a Scientist a success are CSU Stanislaus alumni.

Lisa McMullen, the new Director of Alumni Relations at CSU Stanislaus, has seemingly been preparing for the role for years.

McMullen, who graduated from CSU Stanislaus in 2008 with a bachelor’s degree in communication studies, focused her senior capstone project on what motivates alumni to engage with their alma mater.

Four guest speakers — including three CSU Stanislaus alumnae — were featured at the fourth annual Women’s Leadership Forum in March, hosted by the College of Business Administration.

Advocacy in the California State University system typically means trips to Sacramento to lobby state legislators for a bigger piece of the budgetary pie. But the CSU is affected by federal issues as well, and four CSU Stanislaus students learned firsthand what it’s like to take advocacy to the next level.

CSU Stanislaus is doing its part and much more, thanks to water conservation measures already in place and future plans that aim for a high level of sustainability.